Reading Can Seriously Damage Your Ignorance

In our current political climate, all sides tend to post information that isn't true. Much of that false information now comes from social media sites and can go viral in minutes. My job as an English teacher is to help my students determine what is actual news (backed up by verifiable facts) and what is fake news (not backed up by verifiable facts).

In addition to shared false information, there seems to be a lot of hate in our country right now - once again, on all sides. I am so lucky to be an English teacher because I can recommend books that are mirrors and windows for my students. Students can see themselves in books - mirrors, and students can see others in books - windows. There is no better feeling in the world when a student, after finishing a book, says to me, "I loved that book! It made me think about things differently."

We all have or biases and prejudices, but many times that comes from our fear of the unknown. Reading, fiction or nonfiction, is one of the best ways to challenge our biases and prejudices. Do we end up agreeing with an author's perspective, thinking about the author's perspective in a different light, or totally changing our thinking because of what the author was putting out there?

I love to read books and articles from many perspectives. This is how I remain an informed citizen and how I am able to empathize with others. I don't always agree with what an author has to say, but, at least, I can say I have a new perspective and something to think about and read about further. In the end, "Reading can seriously damage your ignorance." And . . . isn't that what an informed democracy is all about?

The Lines We Cross by Randa Abdel-Fattah 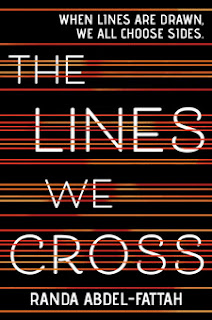 This is one of those books that "can seriously damage your ignorance." Both sides of the refugee debate are shown in this young adult book by Randa Abdel-Fattah. To be honest, I had never really considered the ideas of those against accepting refugees into the country, but this book forced me to look at all sides of the issue. Just like the Take a Knee issue here in the United States, people of all different races, ethnicities, religions, etc. have ideas on how to deal with the ever-growing refugee populations around the world. In fact, when my students were looking at the Take a Knee issue in my classes, one of my students, who is black, disagreed with the majority of the students and felt that taking a knee was disrespectful. Just like my student, there were minor characters in the book who were immigrants themselves and felt that taking in refugees was wrong. I think it's important to be able to hear all sides and have an informed perspective. It would be great if people who are against taking in refugees would read this book, too, because there is so much information to learn from both sides. Ms. Abdel-Fattah does an excellent job of allowing all voices to be heard in the book, but she does have her own perspective, which is obvious when reading her book.

Goodreads blurb: A remarkable story about the power of choosing tolerance from one of the most important voices in contemporary Muslim literature, critically acclaimed author Randa Abdel-Fattah. Michael usually concerns himself with basketball and hanging out with his friends, but every once in a while, his parents drag him to meetings and rallies with their anti-immigrant group. And it all makes sense to Michael. Until Mina, a beautiful girl from the other side of the protest lines, shows up at his school, and turns out to be funny, smart -- and a Muslim refugee from Afghanistan. Suddenly, his parents' politics seem much more complicated. Mina has already had a long and arduous journey leaving behind her besieged home in Afghanistan, and the frigid welcome at her new school is daunting. She just wants to settle in and help her parents get their restaurant up and running. But nothing about her new community will be that easy. As tensions increase, lines are drawn. Michael has to decide where he stands. Mina has to protect herself and her family. Both have to choose what they want their world to look like.
- October 28, 2017 No comments:

New experiences . . . all from my living room couch

I apologize for not writing on this blog for a few weeks, but I've been hooked on reading so many great books (and teaching 8th grade English)! In looking over my most recent reads, I've read books ranging from a Native American childhood in the Southwest to an Egyptian girl, who was sold as a slave at eight years old to a wealthy family.

These books have made me cry, have made me laugh, and have made me think about how lucky I am to live the life I live. Reading lets me experience the lives of others without ever leaving my couch, and I am so thankful that middle school students and high school students have a multitude of fabulous books by fabulous authors to chose from. Here are the four books I have read in the past four weeks: 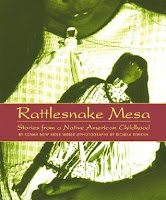 I'll be honest; I usually judge a book by it's cover. That's terrible - I know, especially since I'm an English teacher, and this book had sat in my closet for over a year because I didn't like the cover. Well, I finally decided to read it, and I wonder why I waited so long. It was an eye-opening book. The author, Ednah New Rider Weber, shares brief stories about her childhood - about her friends and family and her times at an Indian boarding school, which she, along with thousands of other Native children, were forced to attend by our government in the late 1800s and early 1900s. Ms. New Rider Weber has a way of telling each story with heart yet at the same time making each story brief, so she can share as many of her wonderful (and heartbreaking) stories as possible.

Goodreads blurb (a really quirk blurb that doesn't do the book justice): EdNah, a seven-year-old Pawnee girl, goes to live with a father she hardly knows on a Navajo reservation after her grandmother dies.


Piecing Me Together by Renee Watson

Just read this book! That's all I need to say.

Goodreads blurb: Jade believes she must get out of her neighborhood if she’s ever going to succeed. Her mother says she has to take every opportunity. She has. She accepted a scholarship to a mostly-white private school and even Saturday morning test prep opportunities. But some opportunities feel more demeaning than helpful. Like an invitation to join Women to Women, a mentorship program for “at-risk” girls. Except really, it’s for black girls. From “bad” neighborhoods.
But Jade doesn’t need support. And just because her mentor is black doesn’t mean she understands Jade. And maybe there are some things Jade could show these successful women about the real world and finding ways to make a real difference.Friendships, race, privilege, identity—this compelling and thoughtful story explores the issues young women face.

Hidden Girl: The True Story of a Modern-Day Child Slave by Shyima Hall

Recently and over the past several months, there have been news stories about human trafficking in the United States and across the globe, but it never really dawned on me what was truly happening to these children, teens, and adults who were sold into slavery or captured into slavery. Shyima Hall's story begins in Egypt where she is a happy child even though she lives in abject poverty. At eight years old, she is sold by her parents to a wealthy family in Egypt; this family eventually leaves Egypt and takes Shyima with them to the United States to be their slave from before sun-up to well after sundown. There is a happy ending to this real-life story, but that happiness comes slowly to Shyima.

Goodreads blurb: Shyima Hall was born in Egypt on September 29, 1989, the seventh child of desperately poor parents. When she was eight, her parents sold her into slavery. Shyima then moved two hours away to Egypt’s capitol city of Cairo to live with a wealthy family and serve them eighteen hours a day, seven days a week. When she was ten, her captors moved to Orange County, California, and smuggled Shyima with them. Two years later, an anonymous call from a neighbor brought about the end of Shyima’s servitude—but her journey to true freedom was far from over.
A volunteer at her local police department since she was a teenager, Shyima is passionate about helping to rescue others who are in bondage. Now a US citizen, she regularly speaks out about human trafficking and intends to one day become an immigration officer. In Hidden Girl, Shyima candidly reveals how she overcame her harrowing circumstances and brings vital awareness to a timely and relevant topic.

If you've never read a book by Jason Reynolds, I highly recommend everything he has written! Reynolds has a way of getting to the heart of the characters in his story and making his readers want to finish one of his books in one sitting.

Patina is another one of these books. It is the second book in his Track series. (Ghost was the first one in the series, which

I also highly recommend.) Patina, a.k.a. Patty, will have you cheering her on as she deals with her mom's illness, her new school, and doing her best to take care of everyone around her, including her younger sister, Maddy.

Goodreads blurb: Patina, or Patty, runs like a flash. She runs for many reasons—to escape the taunts from the kids at the fancy-schmancy new school she’s been sent to since she and her little sister had to stop living with their mom. She runs from the reason WHY she’s not able to live with her “real” mom any more: her mom has The Sugar, and Patty is terrified that the disease that took her mom’s legs will one day take her away forever. So Patty’s also running for her mom, who can’t. But can you ever really run away from any of this? As the stress builds up, it’s building up a pretty bad attitude as well. Coach won’t tolerate bad attitude. No day, no way. And now he wants Patty to run relay…where you have to depend on other people? How’s she going to do THAT?
- October 12, 2017 No comments: