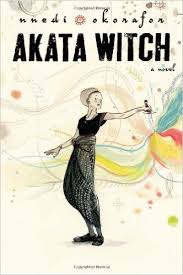 First off, let me say that I am not a fan of fantasy. My 14 year old daughter loves fantasy books.  Me? Not so much, so I was hesitant to pick up this book and start reading it even though I purchased it at our local book store (Buffalo Books and Coffee in case you are interested!  Also, support your own local and independent book stores!)  Anyway, the book hooked me from the very beginning with a wonderful and true main character - Sunny - her companions (Orlu, Chichi, and Sasha), her teacher Anatov, and her mentor Sugar Cream (gained her name from a childhood peculiarity).  I also loved the fact that it took place in Nigeria, and, at times, would give a different perspective of America, which we Americans need at times. Plus, it's book 1 of a series. The second book comes out in October, which I will definitely be buying!

Here is the Goodreads summary of the book:

Akata Witch transports the reader to a magical place where nothing is quite as it seems. Born in New York, but living in Aba, Nigeria, twelve-year old Sunny is understandably a little lost. She is albino and thus, incredibly sensitive to the sun. All Sunny wants to do is be able to play football and get through another day of school without being bullied. But once she befriends Orlu and Chichi, Sunny is plunged in to the world of the Leopard People, where your worst defect becomes your greatest asset. Together, Sunny, Orlu, Chichi and Sasha form the youngest ever Oha Coven. Their mission is to track down Black Hat Otokoto, the man responsible for kidnapping and maiming children. Will Sunny be able to overcome the killer with powers stronger than her own, or will the future she saw in the flames become reality? 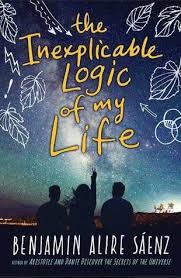 The Inexplicable Logic of my Life by Benjamin Alire Sáenz

Ooooohhhhh, I loved this book!!  For some reason, I have a difficult time choosing books with a male main character.  Books with female main characters usually speak to me, but this book with a male main character is AMAZING!!  I loved Sal - Salvador! He is a real American teenage boy, not the stereotypical American teenage boy we see on television and social media, but a boy who is confused about what his life holds, tries his best, is a good friend and son, and has a good heart.  I loved this book for the fact that what we see on the outside isn't necessarily what's inside a person.

The first day of senior year:

Everything is about to change. Until this moment, Sal has always been certain of his place with his adoptive gay father and their loving Mexican-American family. But now his own history unexpectedly haunts him, and life-altering events force him and his best friend, Samantha, to confront issues of faith, loss, and grief.

Suddenly Sal is throwing punches, questioning everything, and discovering that he no longer knows who he really is—but if Sal’s not who he thought he was, who is he?

Flying Lesson and Other Stories, edited by Ellen Oh 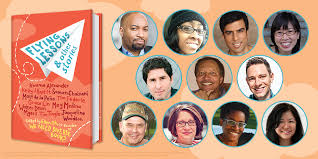 This book is a collection of short stories written by famous authors like Kwame Alexander (The Crossover) and Meg Medina (Yaqui Delgado Wants to Kick Your Ass). Ellen Oh, the editor of this book, founded We Need Diverse Books, and this is one of her projects to get books written by diverse authors into the hands of children and teens.  If you don't like sitting down and reading a whole book with one story at a time, you can read this book story by story.  I promise - you won't be disappointed!

Whether it is basketball dreams, family fiascos, first crushes, or new neighborhoods, this bold anthology—written by the best children’s authors—celebrates the uniqueness and universality in all of us.
In a partnership with We Need Diverse Books, industry giants Kwame Alexander, Soman Chainani, Matt de la Peña, Tim Federle, Grace Lin, Meg Medina, Walter Dean Myers, Tim Tingle, and Jacqueline Woodson join newcomer Kelly J. Baptist in a story collection that is as humorous as it is heartfelt. This impressive group of authors has earned among them every major award in children’s publishing and popularity as New York Times bestsellers.From these distinguished authors come ten distinct and vibrant stories. 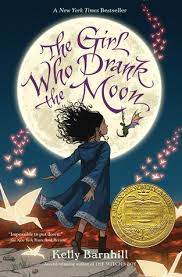 The Girl Who Drank the Moon by Kelly Barnhill (who by the way lives in Minneapolis and whose daughter attended South High School by Lake Street in Minneapolis - support your local authors!)

This book is a beautiful story, written in beautiful language, with beautiful characters.  I could not put this book down, but I had to because I wanted the book to last forever. It didn't last forever, and that breaks my heart. I want the story to continue . . . I'm not going to say much about this book except you won't want to put it down. It will captivate you!

Every year, the people of the Protectorate leave a baby as an offering to the witch who lives in the forest. They hope this sacrifice will keep her from terrorizing their town. But the witch in the forest, Xan, is kind and gentle. She shares her home with a wise Swamp Monster named Glerk and a Perfectly Tiny Dragon, Fyrian. Xan rescues the abandoned children and deliver them to welcoming families on the other side of the forest, nourishing the babies with starlight on the journey.
One year, Xan accidentally feeds a baby moonlight instead of starlight, filling the ordinary child with extraordinary magic. Xan decides she must raise this enmagicked girl, whom she calls Luna, as her own. To keep young Luna safe from her own unwieldy power, Xan locks her magic deep inside her. When Luna approaches her thirteenth birthday, her magic begins to emerge on schedule--but Xan is far away. Meanwhile, a young man from the Protectorate is determined to free his people by killing the witch. Soon, it is up to Luna to protect those who have protected her--even if it means the end of the loving, safe world she’s always known. The acclaimed author of The Witch’s Boy has created another epic coming-of-age fairy tale destined to become a modern classic. 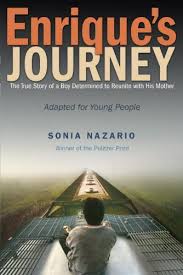 Enrique's Journey: The True Story of a Boy Determined to Reunite with His Mother by Sonia Nazario

This is a tough book to read, not because it has difficult words or anything, but because it's a tough topic.  It's especially important right now with the anti-immigrant feelings and ideas being spoken in our country currently.  What would you do in Enrique's situation? What would you do in Enrique's mother's situation.  This is the young reader's version of the adult version Nazario wrote after hearing about Enrique's story and then taking his journey herself.  You won't be disappointed, and you might have a better understanding of what propels young and old to come to the United States.

An astonishing story that puts a human face on the ongoing debate about immigration reform in the United States, now updated with a new Epilogue and Afterword, photos of Enrique and his family, an author interview, and more—the definitive edition of a classic of contemporary America
Based on the Los Angeles Times newspaper series that won two Pulitzer Prizes, one for feature writing and another for feature photography, this page-turner about the power of family is a popular text in classrooms and a touchstone for communities across the country to engage in meaningful discussions about this essential American subject.  Enrique’s Journey recounts the unforgettable quest of a Honduran boy looking for his mother, eleven years after she is forced to leave her starving family to find work in the United States. Braving unimaginable peril, often clinging to the sides and tops of freight trains, Enrique travels through hostile worlds full of thugs, bandits, and corrupt cops. But he pushes forward, relying on his wit, courage, hope, and the kindness of strangers. As Isabel Allende writes: “This is a twenty-first-century Odyssey. If you are going to read only one nonfiction book this year, it has to be this one.” 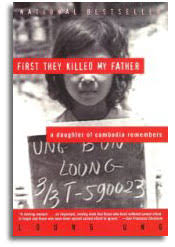 First They Killed My Father: A Daughter of Cambodia Remembers by Loung Ung

There is no easy way to get around this.  This book is heartbreaking.  I knew a little about the war and genocide in Cambodia during the 1970s but not much. Ung's personal story of destruction and then hope makes this a must-read for everyone. Warning: It can be graphic at times, but I truly believe that is important in understanding what Loung Ung and her family experienced. It breaks my heart that this time in world history is barely mentioned in American schools.

Goodreads summary (which doesn't do the book justice):

Chronicles the brutality of the Khmer Rouge in Cambodia, from the author's forced ''evacuation'' of Phnom Penh in 1975 to her family's subsequent movements from town to town and eventual separation.