No Human Being Is Illegal

Elie Wiesel, writer, Nobel Peace Prize winner, and Holocaust survivor, said, "You who are so-called illegal aliens must know that no human being is illegal. That is a contradiction in terms. Human beings can be beautiful or more beautiful, they can be fat or skinny, they can be right or wrong, but illegal? How can a human being be illegal?"

Think about that. "How can a human being be illegal?" It baffles my mind that there are currently 65.6 million people worldwide who have been displaced from their homes. 22.5 million of those are refugees. Also included in that number are 10 million stateless people, which means they don't have a country to call home; they are country-less. Over half of the refugees come from three countries: Syria, Afghanistan, and South Sudan. (from UNHCR Figures at a Glance).

Americans, Europeans, Middle Easterners, and others have mixed views on helping refugees. Should refugees be allowed to enter their countries, or should refugees be returned to their homes - the places they were fleeing from in the first place.  Before reading Refugee, I agreed with those who said we should take refugees in. After reading Refugee, my belief is even stronger. Those fleeing their countries are desperate; we must take them in.

This book is a popular one in our public library system, and I was on the wait list for two months. The book is well worth the wait. To be honest, I think Refugee is one of the most important books of our time, and it is a must-read for middle school students to adults. For those who believe refugees are "illegal" and should be sent back home, this book will open your eyes to the horrors refugees experience in their homelands and then on their journeys. It was an absolutely heart-breaking book. Children and families are risking their lives to live somewhere safe. We need to be accepting of them and help. They are humans and can't be illegal. Warning: Tears might be shed at the end of the novel.

Goodreads Blurb: JOSEF is a Jewish boy living in 1930s Nazi Germany. With the threat of concentration camps looming, he and his family board a ship bound for the other side of the world . . .
ISABEL is a Cuban girl in 1994. With riots and unrest plaguing her country, she and her family set out on a raft, hoping to find safety in America . . .MAHMOUD is a Syrian boy in 2015. With his homeland torn apart by violence and destruction, he and his family begin a long trek toward Europe . . .All three kids go on harrowing journeys in search of refuge. All will face unimaginable dangers -- from drownings to bombings to betrayals. But there is always the hope of tomorrow. And although Josef, Isabel, and Mahmoud are separated by continents and decades, their stories will tie together in the end.
- September 24, 2017 No comments:

Sitting on my front porch, fall is in the air. The sky blinds a bright blue, the wind blows crisply, and the leaves mix with colors - yellow, red, orange, maroon, and some green still. I love this time of year because I can grab a blanket and a good book and curl up to read - inside or outside.  I have enjoyed a few books the past few weeks, and I hope you can find one or two you might enjoy on a crisp, autumn day (or evening).

Being honest here . . . I  haven't finished the book yet. I'm reading it very sloooooowly because I don't want to leave Mai yet. She is a 12 year old Vietnamese girl, born in the United States, who is on a summer trip to help her Ba (grandma) find out what happened to her husband, Mai's Ong (grandpa) during the Vietnam war. Mai has such a wonderful spirit! She is a real American 12-year old girl, who wants nothing to do with traveling to Vietnam. While she is gone, she worries about her friend Montana stealing the boy she loves - even though the boy has no idea about Mai's feelings for him. While on this trip, Mai slowly comes to discover her roots and her love for the country of Vietnam and her "maybe-relatives." Listen, Slowly is a funny, honest, and heartwarming story of growing up, loss, and compassion.

A California girl born and raised, Mai can't wait to spend her vacation at the beach. Instead, though, she has to travel to Vietnam with her grandmother, who is going back to find out what really happened to her husband during the Vietnam War. Mai's parents think this trip will be a great opportunity for their out-of-touch daughter to learn more about her culture. But to Mai, those are their roots, not her own. Vietnam is hot, smelly, and the last place she wants to be. Besides barely speaking the language, she doesn't know the geography, the local customs, or even her distant relatives. To survive her trip, Mai must find a balance between her two completely different worlds.

Want a book you can read in a day because you won't be able to put it down? This one is for you! I was hooked from the very first page of this novel-in-verse (or novel-in-rock and roll). Blade Morrison, seventeen year old, is trying to figure out his life and embarks on a journey to Ghana. In Ghana, Blade comes to a better understanding of himself and his father. That's all I want to say.  You won't want to put this amazing book down!

Solo, a YA novel in poetic verse, tells the story of seventeen-year-old Blade Morrison, whose life is bombarded with scathing tabloids and a father struggling with just about every addiction under the sun—including a desperate desire to make a comeback. Haunted by memories of his mother and his family’s ruin, Blade’s only hope is in the forbidden love of his girlfriend. But when he discovers a deeply protected family secret, Blade sets out on a journey across the globe that will change everything he thought to be true.

Well, if you like books with underdogs, this book is for you. Pottymouth (a.k.a Michael) and Stoopid (a.k.a David) have been picked on since Kindergarten because of the crazy things they do - although they don't think they are crazy. The boys are just being themselves. Included in the book are an amazing mom, a devious ex-dad, an evil classmate, and a rich cartoon producer. The book was a little unbelievable, but, if you are a middle school student looking for a fun, outlandish, and fast-paced book, then this is the book for you.

Tired of being bullied, middle-school underdogs Pottymouth and Stoopid finally fight back with the power of funny.David and his best friend Michael were tagged with awful nicknames way back in preschool when everyone did silly things. Fast-forward to seventh grade Pottymouth and Stoopid are still stuck with the names-and everyone in school, including the teachers and their principal, believe the labels are true. So how do they go about changing everyones minds By turning their misery into megastardom on TV, of course And this important story delivers more than just laughs-it shows that the worst bullying doesn't have to be physical...and that things will get better.

I had no idea what CRT is

For the past month or so, if you watch the news or have a social media account, you have most likely seen stories about politicians and pare... 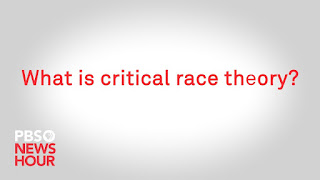